Hi, I am an #alien just like you. The time has come for the truth to be known among all men. Like you, I am a creation of a more advanced civilization that has existed for billions of years. Our true ancestors found Earth millions of years ago and began developing new civilizations on Earth. Neither Darwin nor the Bible can explain factual scientific findings here on our planet which was chosen for us.

When I was six or seven, I used to stare at the stars while laying in the back of the station wagon. I would search for anything moving differently from anything in the heavens. I would close my eyes and feel a connection to something out there, and ask in my mind if “they” could come take me away to a better place. A more beautiful #civilization where people just loved, understood and lived off compassion only. The true message of Jesus actually!

Are humans the real ancient aliens?
How special are we? A recent research paper suggests that terrestrial-style biology may be rare, and Earth may be among…www.nbcnews.com

Before getting too deep into this article, I will admit, I’m only 99.5% sure of my beliefs. I am still working out things such as Jesus, Mohammed, and other religious leaders and their true forms of existence. However, their deepest messages are the same. Love one another! Why would that be? Why would they all speak of love, acceptance, and understanding?

Extremists of all religions get it wrong. Any of us with any intelligence knows that. Being extremist comes out of intelligence, but becomes a habitual obsession. This article can be considered extremist as per its view of aliens, however, it is not a dangerous obsession such as #religious terrorism.

I ponder as to whether those prophets and leaders have been aliens in human form doing what they could to spread more love throughout their creation and the only way they established to do that was to use our own man-made beliefs to spread their messages. Yet, we humans continue to return to a path of hate and destruction.

There have been several scientists who worked at Area-51 in the 1950’s and 1960’s who came out with several matching stories of aliens working and existing in the mountainous bases created by our military. Looking at early maps of the area you can see that there are hardly any buildings combined with the small amount of work that began there in the 1940’s with the Manhattan Project. Apparently, most of #Area-51 was underground with deep installations where we have worked with Aliens for over 60 years now. They are deeply embedded in parts and levels of our military.
.

Is Trump the Antichrist? 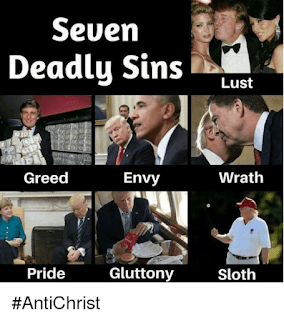 As a recently established Atheist who believes in the proof-driven mountain of evidence that humans are a result of Alien trial and error genetics (Neanderthals, Denisovan, Homo-sapiens) who were created in separate areas of Earth until humans were born and were allowed to multiply, I am oddly pressed to release this analysis of #Trump and the Bible's descriptions of the AntiChrist for us all to ponder as well. I preface this article with some credentials if you please. I do over 30 years as a professional actor, singer, dancer, writer, musician under my belt. I also have an Associate of Applied Science with studies in Nursing, Pharmacology, Psychology, Vet Tech, Physical, Biological, and Chemical Sciences. Further, I have studied Criminal Justice, Government Administration, Debate, Economics and most importantly, the Bible. My theological and biblical studies span eleven years, including five college courses at the Christian University, Liberty (LU). I landed several Dean's Lists, stacked up many 4.0 papers, maintained a 3.85-grade point average, and am a Tau Sigma Transfer Student Member.

An analysis of the scriptures

We can take a close look at seven biblical scriptures describing the personage of the Antichrist. In order to keep this article within our word limit, I am forced to only give you the references, and not the full scripture for each of the seven passages I will discuss. 2 Thessalonians 2:3-4 tells us to not be deceived by a man of sin, who opposes God, exalts himself, is worshipped and sits in the Temple of God. When we reflect these premonitions onto Trump, the image in the mirror emits a history of sin, A man who goes against the word of God, Loves himself, is worshipped by many and has put himself in control of the city of Jerusalem, recently.
Next, we turn to Daniel 7:25, as they say in some churches across the nation who are worshipping this man themselves. A path of choice which reflects the sheep following the Wolf. Daniel tells us that the Antichrist will speak pompously against God, and will try to change the times and the law. Many saints will follow him and be his supporter for a time. Anyone will admit that Donald Trump is one of the most narcissistic leaders in history and that his hate cloaked hate speech once again stomps on Christ's words to 'love one another as you love yourself'. The reference to the change of times can be pointed out in his seemingly push to return to the days of racial divide and hate in America. The changing of laws is just too obvious to point out, but if I must, I'll just list them. Russia, Obstruction of Justice, DACA, the wiping out of environmental and market protection laws, to name a few.
Here, I must combine Revelations 13:3 and 13:5. Together they may be telling about Trump's coming days. These verses have the Antichrist being mortally wounded in his head, and then returning to life, and becoming even more greatly worshipped by his sheep along with a prediction that he will speak blasphemy for 42 months. Is it possible that this predicts an assassination attempt on his life 42 months into his Presidency from which he dies briefly, is announced worldwide and then breathes life again within a common frame of time? It has happened with other humans, including my own brother, but for a leader like Trump, it would send vibes through the governments of the world, and he may be touted as inhuman, or unbeatable.
The final three verses to look at, give us pause as to whether Trump could be the Antichrist, or a pre-Antichrist as is touted in these passages, and would put his name among those of Hiter, Stalin, and such leaders, who have been said to be the pre-markers to the beast. 1 John 2:18 and Daniel 7:24 speak of the several Antichrist's to come before the final beast who will subdue the other 3 major leaders of the world. 1 John 2:22 states the Antichrist will eventually deny the existence of God and Jesus Christ, and announce he is our God. My two arguments that this could also possibly point at Trump is that he seems to be controlling Putin, Xi Jinping, and Netanyahu despite their attempts to seem powerful. Trump has not come out and stated literally that there is no God or Christ, but his followers are mostly Christians who are said to be blinded by the Antichrist until he makes his declaration. Again, Trump already represents the antithesis of God's word with his vileness, hate talk, and deceit.
One more prediction speaks to the number of the beast and his calling to label his followers. I am unable to find current affairs to that match this event, but Trump's reign is not over yet.

Is Trump the Antichrist or a precursor?

After that analysis, I would still like to stick with my theory that religious belief and the Bible are stories written by Ancient humans whom could not fathom the continuing arrival of aliens to Earth, and wrote their remembrances in archaic forms of communication. I would like to tell you Trump is just a bad guy who we have to get rid of. I will state that we can take a cloud and make it into what we want to see. So, could I just be painting a picture the Bible gives us and fitting Trump into it incorrectly? Well, I guess that will be up to you to figure out.
However, I sure wouldn't want to be caught by a possible God, being the follower of the Antichrist. Many Christians love this man as the Bible predicts of the Antichrist They are ignoring the fact that Trump is the opposite of all the goodness they are supposed to represent. They seem to be a very confused lot, and I can't help but putting it all together and thinking that we all might be in trouble soon. Better to be safe than sorry. So, I urge you to take the side of goodness, the road of humanity, and instill the truth of love, justice, and harmony in your souls! If you do this, no matter what is true, you will be protected when it matters.
- February 03, 2018 No comments: Links to this post