Teenager Jordan Edwards was murdered by Texas police officer Roy Oliver, according to a Texas jury, allowing for prominent exposure of the ongoing battle to protect young black men in America, and the possibility of a new dialogue.

Written by: Colin B M Wood

May this righteous justice finally bring the dangerous American policing system, and the country's long embed "good 'ole boy" justice system, that has always put the Blue wall of silence above minority lives, and white lives, as well.

This is a sad situation for all involved, but...

...the murdering of young black men must end! 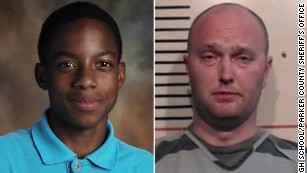 No level, or form of racism, officer error, or psychologically disturbed patrolman should be the basis for officer's to lie, and fudge paperwork to cover up prejudged treatment of the "innocent, until proven guilty"!

Jordan Edwards was shot mistakenly, as an innocent victim, by an over zealous, angry, uncontrollable cop while the car he was in, and not driving, hardly moved forward, away from any harm of the officers present, and actually, hadn't been known to have been involved in anything illegal, under than possible under-age drinking at a party.

I look back, to a couple huge parties I happened upon in high school, one in which officers came to a wealthy home where the teen party was being held, knocked on the door, never entered the home, or drew weapons at those seeking to escape the party, and simply asked if any adults were present, and requested that the party move in doors only, and hushed down. No arrests, no threats, no harm to anyone.

Yet, the officers in this situation felt a need, enforced by racial tensions they learned growing up, to surround a vehicle leaving the party, as they arrived, hold a shotgun on a car of mid-aged teens, knowingly, and chose to take lethal action because they weren't happy enough with the tinted windows on the vehicle, and that it was pulling away from the officer who freakishly bashed in the driver window, for no other reason, except that the offending officer's self-esteem, and inability to control his anger, took precedence over remaining calm, and seeing the bigger picture of a simple teen party, like those that have been attended for decades, usually without an innocent victim being killed.

Roy Oliver may have acted with a genuine feeling of being scared or more possibly due to P.T.S.D., stemming from his two stints in Iraq, but the actions on his body camera do not offer any clear reason for his unwarranted, deathly reaction, and show quite disturbing, clear imagery of racial profiling, and injustice.

For the same reason people who make criminal mistakes, sometimes without even knowing a law is in existence, who go to jail, should this officer, and all the others from the past, have law enforced upon them. This officer is guilty of MURDER, not the lesser charge that was considered.

Spread this post like wildfire, if you believe in a more peaceful, and calm policing system, lead by more intelligent, in control individuals who pass deeply analytical psychological testing, watch the film 'Black Cop' (see my recent review and analyses - https://t.co/tCTwzrQhId), and pass a multiple choice/essay exam on the film, and take on a new oath, swearing to protect the entire public, first and foremost.

As mentioned, this is devastating for everyone involved on both sides of the case, however, it is a highly required outcome to begin healing, and to establish a new beginning toward righteous justice in the U.S.A.

RIP - all young black men, shot falsely by officers, and all other Americans, and other citizens of the world, who have faced injustice at the hands of our mentally disabled, secret policing and justice systems.
- August 29, 2018