You have to see 'Where Hands Touch'!

You have to see Where Hands Touch!

Epic love set against an epic time of horror will transcend anything you've ever felt before!

Where Hands Touch, is a true-story, triumphant, romantic, masterpiece entrenched in the deepest mud of the atrocities and heartbreaks of the Jewish-laden concentration camps in 1944, Germany.

A young German Aryan soldier and a 16-year old half-German, half-African-French girl fall in love. It is a coming of age masterpiece, which integrates genius direction and acting.

Those attributes blend to create a Schindler's List-level, soul-searching retrospection of Nazi Germany, and their death camps.

The reflection of the beauty and raw interracial relationship molded into a ferociously disturbing background story drains your soul.

The cast says it all

Amandla Stenberg and George MacKay, are two bright actors who have jumped into the spotlight. Their performances are so real and filled with chemistry one will not want to miss scenes. I was sure to pause, each time I got up during this film. I felt the need to cut down on the interruptions, as the movie moved briskly along.

Ms. Stenberg is already an anointed Disney Princess, in her own right. She is in a recurrent role on Sleepy Hollow, as well. She was very captivating.

Mr. MacKay has been capturing my attention from a very young age. In 2003, he created a memorable performance in P.J. Hogan's film adaptation of Peter Pan.

Alas, I had forgotten about him, until 2008 when he played the role of Aron in Defiance, and then in 2009 was Harry in The Boys Are Back. Once again, he faded from my memory for some odd reason.

Then, in 2016, George blew my socks off. In a film that should have won an Academy Award or two itself, Captain Fantastic, starring Viggo Mortensen in one of his own finest acting roles, George played Ben Cash's son, Bodavan. It felt as though I was watching a young man going through a mid-life crisis. He was moving. Now, in Where Hands Touch, Mackay delivers his most poignant and acrylic piece of fine art, yet.

There were hints of Schindler's List, however, this movie definitively followed its own ingenuity. At first, I thought it was similar in design, but, as soon as the two main characters Leyna and Lutz took charge of the screen, the movie took on a whole different role and purpose, and immediately I was looking up who this story had to be about. I knew it had to be based on a true story.

"In 1944, a 15-year-old girl, daughter of a white German mother and a black African father, meets a member of the Hitler Youth. They become bound by the realization of the horrors being committed around them."

The epic-style saga takes us on a journey, enveloping us with the incredible love of two very young people, of a different color, during a difficult time in Germany. The story gets ugly quickly. I couldn't help thinking right up front about the Anne Frank Story. This version was with a half-African girl out in the open trying to demand rights due to her half-Aryan German blood.

Eventually, we see her mother disappear, her very young brother is forced into the Hitler Youth, and she is taken by mistake by an assinine Nazi to a concentration camp, wherein the movie, at least, she is the only colored woman.

Her life obviously gets ugly and becomes the focus of the head of the camp. While he begins to zero in on her, and almost take her life meaninglessly, Lutz shows up at the right moment in the distance, while a gun is about to be lifted to her head. He rushes in to take over the ugly deed, and the romance ensues once again.

I'd ask you to put yourself in their shoes, but that would be impossible unless you were there, or actually watch the film alone, or with a loved one. I will have my son watch this film and Schindler's List, one day soon, so he can learn the truth and the horrors of one of the worst periods in modern human history.

Don't miss this movie. It's currently streaming on Hulu, or can be rented online, or on your entertainment device.

Thanks for reading everyone. Coming up next...

Is America Idol setting up for its greatest season ever?

Have you ever dreamed, or at the least, wondered what it might be like, if we could all live as long as we wanted to? Maybe you've thought, if I could stay younger longer, I wouldn't mind living to 150 years old. Perhaps, like me, you have health issues, and still have young kids, and would give anything you've got to be 20 years younger again.

Sometimes, the world is blessed with someone that can see, develop, and create things no one else in the world has. It's a rather large list in 2019, with names such as Socrates, DaVinchi, Gallileo, Einstein, Pasteur, Swiss Chemist Friedrich Miescher, who first discovered DNA in the 1860's, and many more.

Who is David Sinclair, Ph.D.?

David Sinclair, is a Professor in the Department of Genetics at Harvard University Medical School. His reputation involves research in aging, and how to slow it down.

He received his Ph.D. in Molecular Geneticism in Australia, at the University of New South Wales, Sydney in 1995. His post-doctural research began at M.I.T. with Dr. Leonard Guerente.

In 1999, Harvard Medical School recruited him. He has since, focused on the role of sirtuins in disease and ageing, as well as in chromatin, energy metabolism, mitochondria, neuro-degeneration and cancer.

Professor Sinclair co-found (Sirtis, OvaScience, Genocea, Cohbar, Metro Biotech, ArcBio and Liberty BioSecurity), and is on the board of several other genetic based companies. He is a co-founder and co-chief editor of the journal Aging. Multiple Books, Television engagements, as well as many other attributes validly support the incredibly impressive career of David Sinclair.

Professor Sinclair has entered the main-stream news recently with the announcement that he is working on two pills. One of those, is entering human trials now, and he plans to have it approved by the FDA and available in two years. The other, has undergone family trials, and is just shy of human trials by a year or two. He hopes that pill will be available to the public in five years.

Reverse aging and self-healing organs has been a goal of Dr. Sinclair's since he received his degree in 1995. His studies have followed a path directly to where it has lead him today, and if all goes well, as he believes it will, he may become one of the most famous geneticists in history.

The good Professor has created a pill that seems to reverse your physical, biological age by 20 years. It is about to enter human trials, but he has already tried it out himself, and on family members. Dr. Sinclair has reported feeling 20 years younger, able to do things he couldn't anymore physically, and feels stronger. His bones are stronger, and he is not getting sick. His father who is in his mid-70's couldn't walk well anymore, and hardly got up to do anything. He is once again hiking mountains with his son, David. David's sister-in-law had been trying to get pregnant for years, and once in her 40's, gave up hope, until she started taking Dr. Sinclair's pill. She immediately got pregnant within 3 months, and has a new bundle of joy.

Dr. Sinclair is 49. NBC recently reported, "Sinclair now boasts online that he has the lung capacity, cholesterol and blood pressure of a young adult and the “heart rate of an athlete.”

Sinclair describes this pill as life extension products which are made of  molecules called “NAD boosters.” NAD stands for nicotinamide adenine dinucleotide, a key compound in every living creature 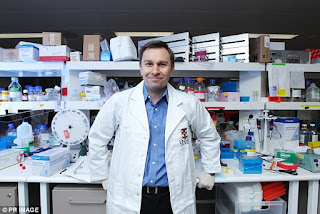 What about that organ healing pill?

Yes, the indomitable Professor David Sinclair, Ph.D. is working on another pill, soon to enter human trials. This miracle worker is intended to cause organs to heal themselves after injury or disease, and to protect themselves from further harm. He predicts this pill will extend the life expectancy of younger people to 150 years old.

This pill is created along the same theories and the same processes mentioned above.

Some scientists, as is usually the case with "fountain of  youth" promises by other scientists, think it's not worth getting excited over. They mention that mice trials do not always prove a drug will work in humans.

What those scientists seem to be ignoring, however, is the result that one of these two incredible life-extending pills has already undergone unofficial human trials in Dr. Sinclair and his family, and are working 100%, with no bad side effects in anyone taking them.

Of course, there is a lot of science involved here, research left to complete, and then 10 year studies on the effects, if the FDA approves either, or both of these medications.

I, for one, sure like to dream, and this would be a dream come true for people in my same health situation, or worse, and for our children.