S.T.A.P. benefits from big donations and lots of love! 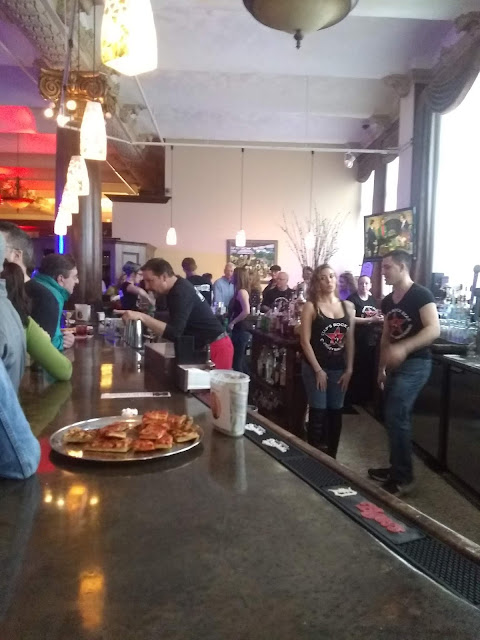 S.T.A.P. benefits from big donations and lots of love!

The Southern Tier A.I.D.S. Program threw a great benefit on Sunday at Remlik’s Grille & Oyster Bar, where the love of many came together in beautiful fashion to boost research and help for A.I.D.S., in a big way.


S.T.A.P. Development Director Mary Kaminsky couldn’t have sounded happier about the turnout and results of the 2019 Startender and Divas Rockstar A.I.D.S. benefit. Mary soared around Remlik’s talking to everyone and flashing a wonderful smile as the donations flowed in from everyone attending.
Some big donations joined small donations, and some big businesses too. There was a 50/50 raffle in which the winner donated back the money to S.T.A.P. There were gift baskets and envelopes taken for big donations. There was entertainment that seemed to last throughout the whole event, with small breaks for performers to join the crowd and fun and collect donations themselves.
DeDe Kupps, Monroe Sedgwick, Dusty Boxx, Katrina, Virginia Ham, Peaches Eclair and Remlik’s very own raw bar master and master entertainer Chris DeCosta, who all put the bar into a roar of applause each performance, were masterful, entertaining, and the lives of the party.

If you take a look at the photo, you can see the Startender totals next to their first names. All Startenders did wonderfully, and the grand total was $14,975.84, bettering last year’s total by approximately $3,000. You might see a total of $18,050 in the photo, but S.T.A.P. decided that as incredible as the Divas were we couldn’t count their take twice, along with some doubling of a couple other big tips by accident. Certainly, they are thrilled with the real total, in any case, and greatly thank everyone who attended and made this such a success again this year.
Remlik’s was packed for almost the full benefit, and the extra room in the great hall outside was open to the crowd, lending a comfortable atmosphere for those who needed a little space or break from the definitively rocking music. There was free pizza to go with your drink of choice, and a conversation to be had just about anywhere in the room.

All we saw were smiles on every soul in the room, and it seemed that everyone knew exactly why they were all there, and what the cause was for, and you could gather a sense of humility and humbleness from a crowd of big hearts who have all probably lost someone in their lives to A.I.D.S., Auto-Immune Deficiency Syndrome.
A.I.D.S. research has come a long way, and it was last reported that numbers of deaths in America had dropped to it’s the lowest number ever, and those contracted with the disease, as well. In the U.K., there have now been two individuals completely cured of the disease, and the hopes are that those treatments get cheaper and more accessible to the rest of the world so everyone can be cured.
Be sure to catch the next S.T.A.P. Rockstar Bartending Benefit Bash, and become part of history, too.